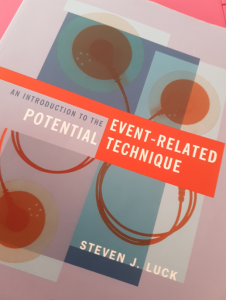 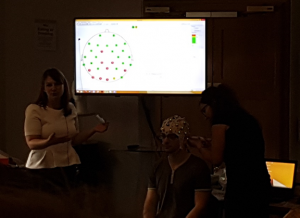 My PhD research combines methods from corpus linguistics and psychology in order to find out more about how language is processed in the brain. The method that I use from psychology is known as electroencephalography (EEG), and this involves placing electrodes across a participant’s scalp in order to detect some of the electrical activity of the brain. More specifically, I use the event-related potential (ERP) technique, which involves measuring the electrical activity of the brain in response to particular stimuli. When I carried out my pilot study earlier this year, this was the first time the EEG/ERP method had been used in the Department of Linguistics and Language, making it a really exciting project to get involved with.

Having completed my pilot study and obtained some really interesting results, I have refined my methods and hypotheses and I am now ready to recruit participants for my next two experiments. For one experiment which will take place in late August, I am looking for 16 native speakers of Mandarin Chinese; for another experiment which will take place in October, I am looking for 16 native speakers of English. I would really appreciate hearing from anyone who is interested in taking part! The whole procedure takes about 1 hour; it takes about 20-30 minutes for me to attach all of the electrodes, and the experiment itself takes an additional 20-30 minutes.

If you do decide to take part, you will wear a headcap containing 64 plastic electrode holders which the electrodes are clipped into, as well as 6 electrodes around your eyes and 2 electrodes behind your ears. The electrodes make contact with your skin via a conductive gel which enables some of the electrical signals in your brain to propagate to the electrode wires and into the AD-box, where the electrical signal is amplified and converted from analog to digital format. The amplified signals are then transmitted to the USB2 receiver via a fibre-optic cable, before being relayed onto the data acquisition computer where your brainwaves can be viewed as a continuous waveform. Before starting the experiment, I will ask you to blink, clench your teeth, and move your head from left to right so that you can see how these movements affect the observed waveform.

The experiment itself involves reading real language data that has been extracted from the British National Corpus. This consists of sentences which are presented word-by-word on a computer screen. After reading each sentence, you will be asked to respond to a true/false statement based on the sentence that you have just read.

Before conducting my pilot study, I carried out a number of test-runs on other postgraduate students and each one of them found it to be a really interesting experience. For instance, Gillian Smith, another PhD research student in CASS, agreed to take part in one of my test-runs and here she describes her experience as a participant:

“Getting to be involved in Jen’s experiment was a great opportunity! Having never participated in such a study before, I found the whole process (which Jen explained extremely well) very interesting. I particularly enjoyed being able to look at my brainwaves after, which is something I have never experienced. Likewise, having electrodes on my head was a lovely novelty.” 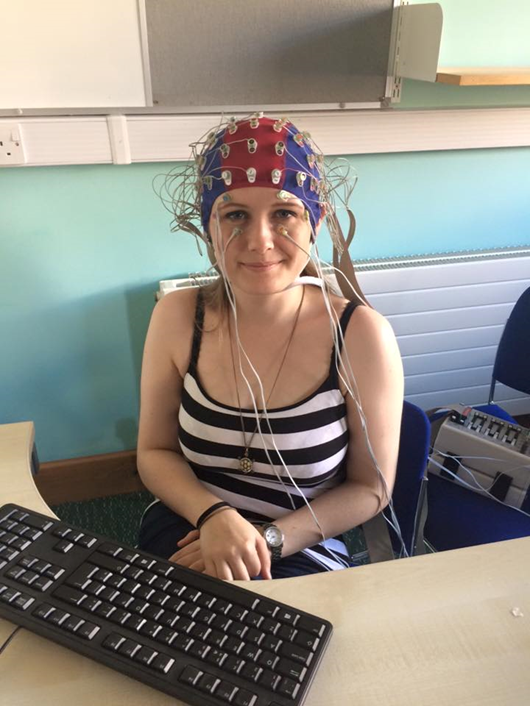 I would really like to hear from any native speakers of Mandarin Chinese or native speakers of English who would be interested in taking part in one of these experiments. Please email j.j.hughes@lancaster.ac.uk to express interest and to receive more information.