In December 2013, after three years and two months of work, I submitted my PhD thesis. Last month, I successfully defended it, and made the (typographical) corrections in two nights. I’m a Doctor! It’s still exciting to say. 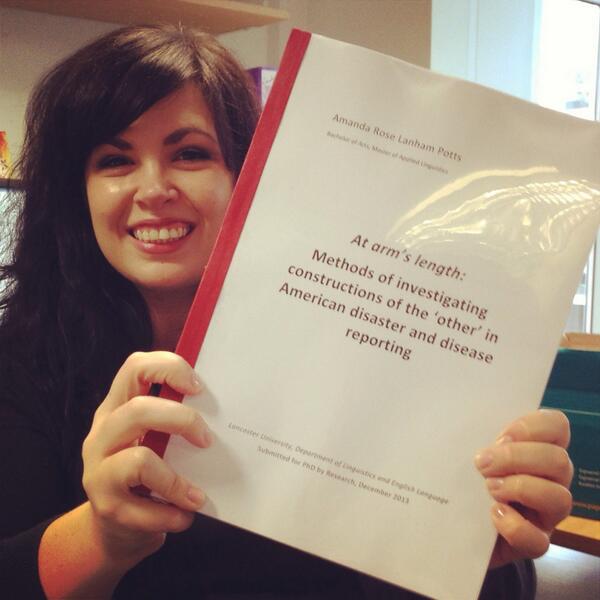 A PhD is certainly not easy — I’ve heard it compared to giving birth, starting and ending a relationship, riding a rollercoaster, making a lonely journey, and more. I relocated across the world from Australia to begin mine, and the start was marked by the sadness of a death in the family. It’s been a whirlwind ever since; throughout the course of my degree, I taught as much as possible, I researched and published outside the scope of my PhD, and in April 2013, I began full-time work in the ESRC Centre for Corpus Approaches to Social Science.

The question that I get most often is a question that I found myself asking for years: how? How do you do a PhD? How do you choose a programme and keep from looking back? How do you keep close to the minimum submission date (or at least keep from going beyond the maximum submission date)? How do you balance work and study? I’d like to share a short series (in three installments) about my degree and my lessons learned. There are many resources out there for people doing PhDs, but I wasn’t able to find any that described my experience. I hope that this might help some others who are [metaphorical representation of your choice] a PhD. Before beginning, I’d just like to stress that these resonate with my personal experience (and with those of many of my friends), but won’t align with everyone’s circumstances.

The first installment is five pointers about what to do when applying to a programme.